On September 9, the White House released the President's Economic Blueprint, laying out "five pillars" for the economic agenda going forward. Three have a significant and direct impact on transportation policy (see the full list):

1. Empowering Workers, with more good-paying jobs and greater power to unionize and have dignity at work;

2. Making and Building it in America, by investing in infrastructure, making America the world's leader in clean energy jobs and innovation, bolstering our manufacturing base, and buying American.

For those with a studious eye on regulatory policy and grant-making, we are already seeing several of these priorities included in the policies and actions of the U.S. Department of Transportation (DOT) including Labor Peace Agreements, Buy America, small business inclusion, and greater scrutiny for airline code sharing and mergers. The first three, in particular, have been more explicitly attached to federal grants.

The chart provided below shows transportation, finance, and retail trade above the line, in other words, experiencing increased concentration over the 20-year period (1997 to 2017). In the Blueprint, the Biden Administration devotes significant attention to the Ocean Shipping Reform Act, which they attribute a contribution to lowering "East-West Ocean shipping spot prices down more than 50% compared to their May 2022 peak" (see p. 44).

Look for more action on all of these as the U.S. DOT leverages its federal grant-making. On the regulatory side as well, as the DOT considers the JetBlue-Spirit merger agreement and the JetBlue-American Northeast Alliance, these are important pillars for the industry to keep an eye on and consider.

As many economists have documented, mergers and consolidations have contributed to higher prices, lower income, and dampened innovation. 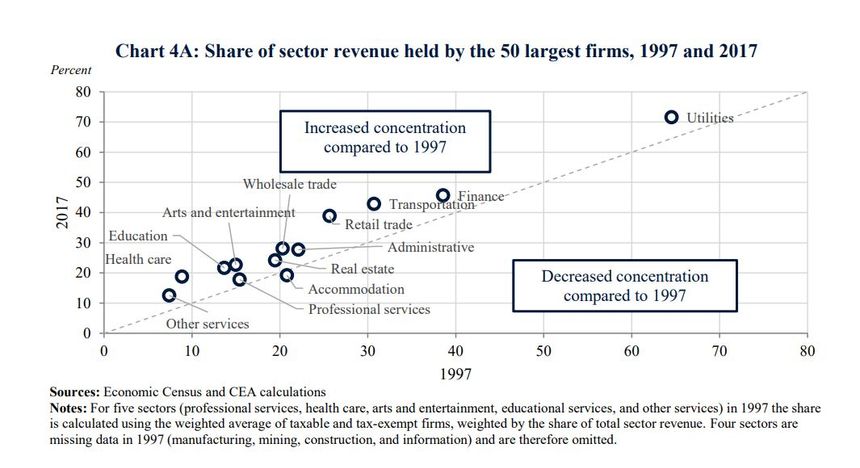 Tweets on this subject

My first two years in office spurred the strongest economic recovery in recent history. Today, I'm releasing my Economic Blueprint, a look at how our wins are rebuilding an economy that works for working families.https://t.co/eSlr3ymdo8

It's long. So here are the big things: